The morning after arriving back in Hanoi from Halong Bay, it was battle stations again for our trip to rural location Mai Chau, 150km southwest of Hanoi. We’d left Birgit in charge or organizing this, and she did a great job booking us down there in a 4WD vehicle complete with English-speaking guide and accommodation in the White Thai village area.

Things didn’t start so well when the guide failed to pick us up on time, but after Birgit put on her teacher-voice at the tour company headquarters, things were underway. We arrived in Mai Chau and were pleased to find we’d be staying in a Thai style stilt house, the likes of which we’d seen at a museum in Hanoi. Lukas and Phoebe were thrilled and set about stick-fighting immediately on the thin bamboo floors, while Birgit and Alex wandered around looking at clothes and fabrics for sale.

In the afternoon we went on a big walk around the area, which is very picturesque. The rice fields are tucked into valleys in between karst mountains/ hills similar to those in Halong Bay. Laos is only a hundred kilometers away. We were a few hundred meters about sea level, with cloud forming a roof over the valley so that the whole thing was like a giant greenhouse. It’s no wonder the rice grows so well – its brilliant green shoots light up the landscape in all directions. 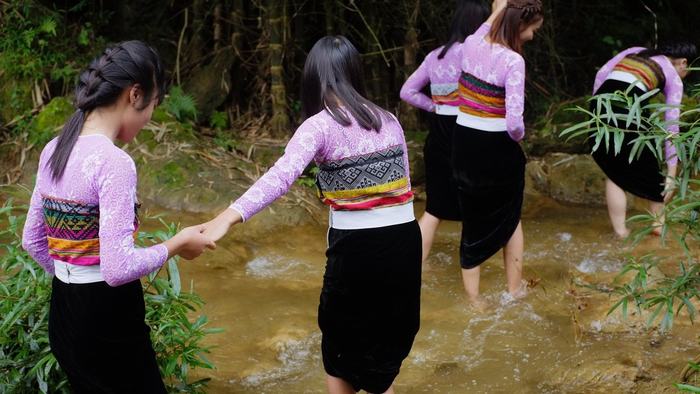 There are million Thai people living in Vietnam, many of whom have been there for four or five hundred years. We asked our guide plenty of questions, and it was interesting to hear him talk about the relationship between the Vietnamese and Thai (and other minorities). “On the first day of school, every child is taught that we are all brothers, no fighting, all fair.” Hmmm. Contrasts considerably with some other things we’d heard! Tour guides not only have to pass strenuous English language courses to become guides; they also have to show sufficient patriotism and pass tests on toeing the party line. Still, the locals seemed pretty happy, and their houses and villages didn’t look in any way poverty-stricken.

Explore the cultures of people living there

During our wanderings, we walked past a wedding. It was funny to see the traditional looking wedding next to a couple of stilt houses, surrounded by bamboo, banana palms, and rice paddies, but with modern dance music booming from a stereo that you could hear right across the entire valley, while outside dozens of motorbikes were parked and men sat around smoking and talking on cellphones.

That night we watched a performance by a Thai traditional dancing troupe, who were pretty impressive. Lukas was one of the unlucky grabbed for audience participation (groan) near the end and had to endure a dance where you jump and step in between long bamboo sticks that are whacked together at floor level. I think his ankles took quite a battering. 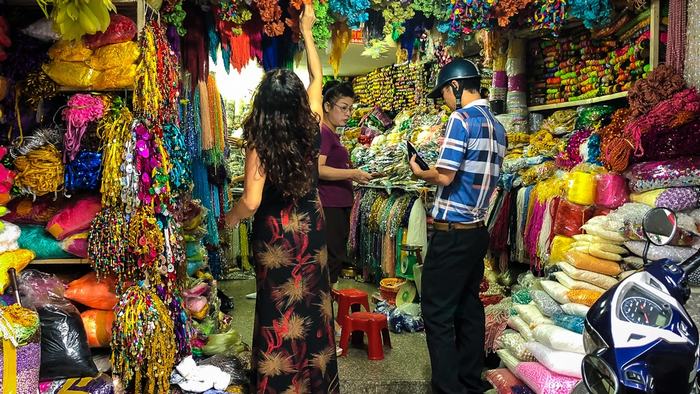 The second day was another big walk to visit the local market. There was some interesting stuff on display, especially the various smelly offal and organs – Phoebe was not impressed. Our guide gave us ‘the best coffee in Vietnam’ and told us that at age 18 everyone sits exams – pass and you can go to University or do something else, but fail and you get packed off to the army. Damn. He just passed because his Dad put The Fear into him two weeks before exams. Most Vietnamese certainly have the knack for a good story, and he had plenty more.

Another good one was about the locals zooming about on motorbikes on the narrow ridges between the rice paddies. Every so often at night one, probably inebriated would crash off and the village would wake up with a motorbike half submerged in a rice paddy and muddy footprints leading to the guilty parties stilt hut.

We had lunch back in our hut (the meals the whole time were excellent) and then it was time to head back to Hanoi. We’d only spent a short time in Mai Chau but it was excellent, and I think we learned a lot from our guide especially. Before going there we’d seen Mai Chau as a sort of Sapa-lite (since we wouldn’t have time to go to Sapa), but it was a great destination in its own right.

Alex and I were thinking and stressing a little about our promised China visas that we expected to receive that night upon our return to Hanoi. That night would also be our last night with Birgit and Lukas as they would not be coming to China, so we planned a nice farewell dinner. But I’ll leave the story of that and the visa debacle until the next blog.

Visit our website to get more information about Mai Chau Village. Do not hesitate to contact us if you have any questions. Share this article with others if you find it useful.