We are off to Mai Chau which is a district of Hoa Binh Province in the northwestern region of Vietnam. The district is located at about 160 km from Ha Noi.

We are picked up by a 4×4 outside the hostel and already three Canadian lady and her daughter sitting tightly in the back two seats. We are now sitting in the middle with the tour guide, and the front two seats are occupied by the driver and co-driver who’s role is still unclear even to this day!

This is going to be a rough ride and its not long before we’re hurtling down the bumpy highways towards our village in the mountains. Two hours later at the halfway mark has us at a grim roadside cafe where the toilets were the worst ever and to make matters worse it started to rain as we drove the steep mountainous roads. The inside of the 4×4 stinks of burning fuel which is giving me a sore head and I’m pondering asking to get out for a few minutes.

Well its all going just swimmingly now as we have the two lads in the front talking Vietnamese loudly over the music and the two Canadians being even louder in the back seats while we’re stuck in the middle trying to keep it together.
I’m trying to get some sweets out my bag on the floor when all of a sudden loud shriek from the back seat followed by Jill going ‘no, oh, noooo!’ I look up to see a large dumper truck followed by a dog, or what was left of it lying in a pool of blood as we drove by. Jill has witnessed the whole thing and is now in tears. I’m living the dream now, aren’t I?

All the tour guide could come up with was the fact that we won’t be eating dog tonight and starts rattling on a bit too far about the dogs that they breed for eating and stuff. It's not long before I give him the evil eye and told him to hush as Jill’s tears are still streaming from her eyes. 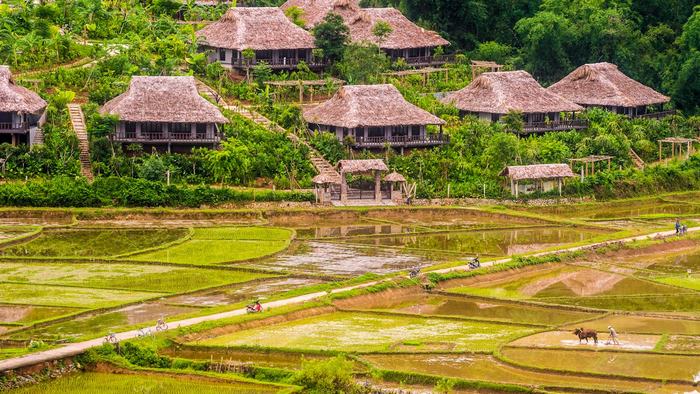 We eventually reach Mai Chau district, and we stop high up in the mountains looking down on the town. The views are pretty cool up here as we can see the hundreds of rice fields and the town itself which is wedged between the mountains. Above the town, to the left, we can see the Thousand Step Cave which we are visiting tomorrow, and we’re not sure if we are looking forward to that judging by the steepness of it.

Ten minutes of downhill driving later and the weather clears up just before we reach the beautiful Village outside the Town in Mai Chau.

We are shown to our common room where we are sleeping which is a very large wooden house on stilts with a very thin floor of bamboo sticks. It feels unsafe, but in fact, its perfectly safe as bamboo as we all know is a very tough material.

There’s a nice Vietnamese lady who works in the House, and she prepares us tea and lunch and helps us get our stuff organized up in the large sleeping room.

We left the house with a different local lady wearing a traditional Vietnamese hat who shows us our bikes and leads us on our way through the village.

There are chickens, dogs, and the odd child roaming the small lanes around the village which has virtually no one walking about. There are shops along the roadside with people happily working, weaving or woodcarving gifts and they smile and occasionally wave as we cycle past on our rickety old bikes.

We leave the village out into the wide open floor of the valley, and it's gorgeous. Rice fields and Mountainous scenery surround us as we cycle along happily following the guide with her Iconic Vietnamese hat on.
People are working the fields planting and harvesting crops, and there’s Ox’s freely roaming about without a care in the world. There are nice colors of plants along the way and also lovely little wooden shacks that the farmers use to keep their farming tools. We do a large U-turn and head towards a different small village on the other side of the valley. Large Ox is being led along the road and farmers are going back and fore on makeshift tractors that are just an engine with two wheels tied to a cart.

We reached a large house which turned out to be the own guides house, and she happily invites us in for cups of tea.

Her English is OK, and she shows us around the house and also points out her two Ox hiding behind the garden shed down below. The Mai Chau area is well known for its stilt houses which are called Thai stilt houses and are made of bamboo and timber. These houses are elevated 10-12 feet off the ground to avoid water damage and shelter animals from the elements.

The Vietnamese lady shows us hundreds of business cards and photos she has collected down the years from other tourists and its quite compelling as a lot of people have sent handwritten letters and commented in a few books.

We then crossed the road over to her mother and fathers house where we sat around the fire for a few minutes as she made another cup of tea. Her mum and dad spoke zero English, so we sat about not saying much at all until we went outside to look at the water well and animals running amok in the garden below. 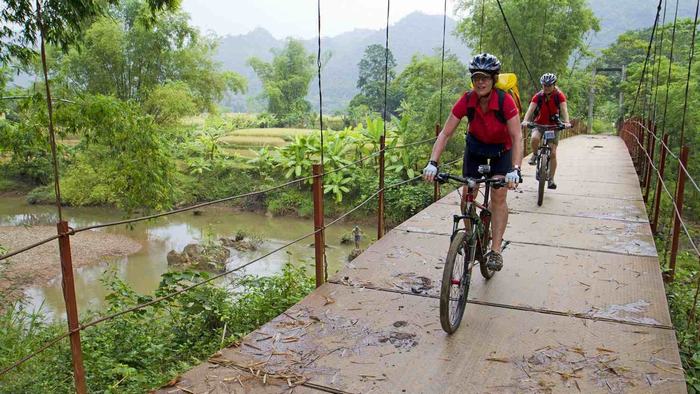 We’re off and cycling again, and we head back across the valley floor on a different route around the base of the mountain until we arrived back at our digs. Its tiring stuff and we had a short nap before sitting down for dinner of chicken, rice, and potatoes which tasted much better than we’ve had recently. The rest of the group headed off to watch a Vietnamese dancing show after dinner, so we headed upstairs to our room. Our bed is very hard underneath and isn’t comfortable at all, but we made the most of it and got an early night making sure the mosquito net was tightly secured.

We woke up to the cockerels crowing at around 5 am and then the dogs barking at around 5.01am! It’s a broken sleep for the next two hours while the dogs and chickens carried on with their competition to see who can be the loudest!

Breakfast was eaten with one eye open, and we tried to get freshened up and get ready for the cycle into town to begin the climb up the 1000 Steps Cave! The enthusiasm is brimming through the both of us now…honest.
It was very pleasant as we cycled through the little village avoiding the chickens and the dogs who were cheekily sleeping until I got my revenge by screeching my brakes on as I passed!

We watch farmers working on the land as we cycle into town and every so often a large Ox would stare at us from behind a bush which kept us on our toes. Its a relief cycling on the smooth tarmac in town and we don’t cycle very long until we reach the first step of the staircase that would lead us up to the Cave at the top.

The cave was used during the Vietnam war as a place for the villagers to hide in while the town was being bombed.
We started climbing the steps, and it took us around a half hour to reach the cave where we sat and enjoyed the views. There’s a lot of litter lying around and its pretty dirty inside the cave, so we didn’t bother going into the cave so waited for the others to explore it before heading back down. One thousand three hundred sixty steps later and we’re at the foot of the mountain leading for the town market.

Once we arrived at the street market, we were amused at the selection of fresh fish for sale which is still alive swimming in very shallow buckets of water. ‘I'll have that one please, Chop! There you go!’ is how it seems to go.
There’s large carp, trout-like fish and smaller fish like whitebait for sale either dried, cooked or fresh. There are also 12 different types of rice for sale and its no surprise that it costs a fraction of the price it does back home and much bigger grains too.

There’s lots of fresh vegetables and fruit for sale, and there’s livestock tied to the side of the road along with baskets of live chickens for you to pick from and they’ll even prepare the meat for you there and then. Then horror struck as we passed the local dog meat stall and I don’t mean pedigree chum! There are visible parts of dogs such as hind legs, ribs, and even the tail end. We walked by without saying a word as all we could think of was the poor pooch that got run down the day before. A Scoop snack sounds so wrong now!

We reached the end of the market stalls, so we hopped back on our bikes and cycled the few miles back to the village where our lunch is served much to our approval.

After lunch, we all headed back to Ha Noi and endured another nightmarish 4-hour drive jammed in the back seats of the same 4×4 although there was no roadkill to report this time.

We are so glad to be back at the hostel once more as the things we took for granted such as warm and comfortable beds feel like heaven.

We fly off to Ho Chi Min in the morning, so it's going to be good to compare the North and the South.

For more information about best Mai Chau tour, you can visit our website. Do not hesitate to contact us if you have any questions. Share this article with others if you find it helpful. Thank you!