US men sat cross-legged on the rickety bamboo floor, which is not that easy for me following a myriad of minor motorcycle knee injuries and the general lack of suppleness one finds as they approach, ahem, middle age.

Hung joined us with a canvas water bottle and several small teacups that he proceeded to fill from the bottle and then pass around. I contemplated the clear liquid with sober deliberation, much to the amusement of my hosts, sniffed with inflated nostrils and took a quick sip. My suspicions proved perfunctory at best and indeed fruitless as the spirit was quite tasteless but warming, Hung grunted, and my cup was refilled. All the cups were raised, a toast was made in Vietnam, and the contents were consumed in one. Primarily, it was a bottomless cup. When the bottle was exhausted, another was swiftly retrieved, and the toasts and cheers were repeated. It would be constant throughout the evening.

After a short time, the chit-chat and banter became hushed, and the mood took on a more formal tone. The bottle was passed to one member of the group who screwed the lid on tightly and collected the cups. This chap motioned for silence by raising his hand and cleared his throat. At which point, I became nervous. Was I about to be married off to one of his daughters or had I inadvertently stumbled across the Mai Chau branch of the Masons?

My guide, Mr. Duc, shuffled closer to me as the speaker began his oration and quietly translated for me. I started to smile; they were telling tales and tall ones at that…!

When the chap had finished his slightly blue and somewhat incredible tale, he refilled everyone’s cups and passed the bottle to his neighbor. This would continue around the merry throng, and like most bar talk, the subject content became increasingly fantastic as the friends tried to outdo one another with their stories. 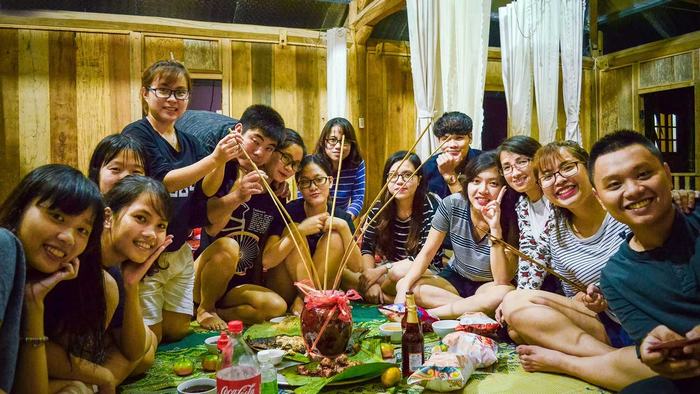 Ultimately, the buck stopped at me. I protested my lack of Vietnamese and cultural identity, but Mr. Duc assured me he would be faithful in his translation and that the locals would be gravely offended if I refused. I racked my brains, what to tell? I eyed my eager audience and took stock.

There was Hung, my host, village leader and ‘entrepreneur’ who made a tidy business from renting stilt houses to wannabe Hanoian Suburbanites, a collective of rural farmers and Duc, a retired opium trader and burgeoning tour operator.

I wished I were Palin.  That’s it! Something Pythonesque would appeal, admittedly, but what? The clock tick-rock as my listeners rocked back and forth on their heels and gazed wistfully at the bottom of their cups.

Then I had a revelation. Why, of course, I knew of a tale that might appeal and would be right up their back alley!

I began to narrate Chaucer’s ‘Miller’s Tale,’ albeit in a somewhat simplified and ‘secular’ manner. Thank goodness for an education. Mr. Duc looked at me incredulously as I paused at the end of each paragraph, and then translated to the newly receptive audience. It seemed that tales of infidelity, cuckoldry, and deception hadn’t gone out of fashion and my giggling audience could identify with the medieval attitude to misogyny and adultery.

They howled, they rolled, and they grimaced as I shamelessly mimed Alison’s humiliation of Absolon, and Nicholas’ subsequent scalding. Talk about appealing to the lowest common denominator!

When I had finished the tale, the farmers all decided to act out the story themselves and took turns in shoving their bare buttocks in each other's faces and threatening to insert foreign (sic!) objects. The rustic room roared with laughter and mock screams which must have intrigued the poor wives who were working on the floor below.

Tears flowed across their ruddy cheeks, and their puerile exertions resulted in throaty coughing fits and much back-slapping. Maybe it was the Mai Chau branch of the Masons after all?!

Perhaps I tell a good tale, indeed a good story is truly timeless, but I like to think that I entertained my hosts thoroughly and that the Miller’s Tale would remain in their minds and be retold at other tale-telling events.

I struggled to my feet, blaming poor circulation rather than my absurd intake of rice wine, retired to my sleeping mat and fell into contented slumber.

For more information about Mai Chau 1 day tour, please visit our website. If you have any questions, do not hesitate to contact us. Share this article with others if you find it helpful. Thank you!